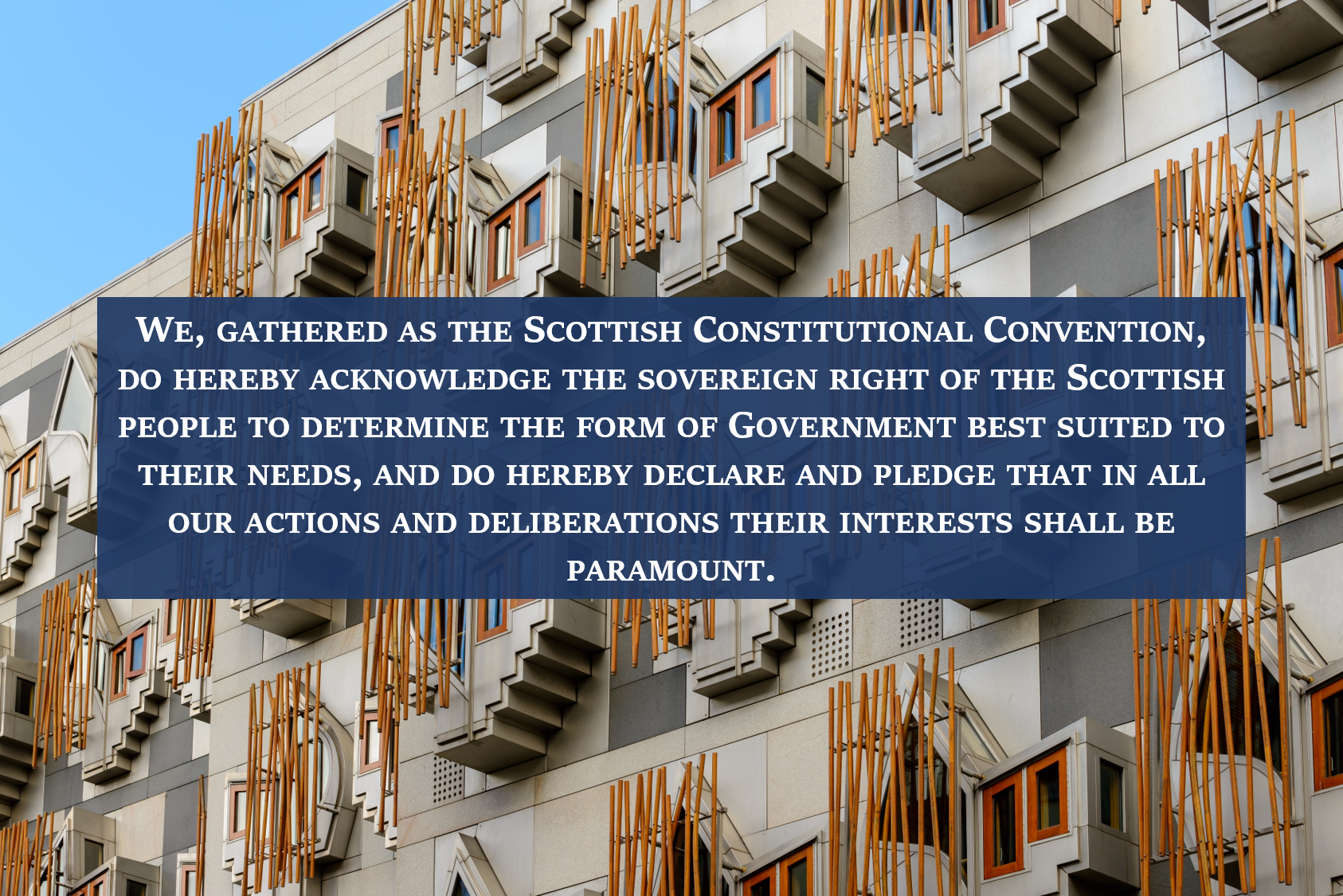 “We, gathered as the Scottish Constitutional Convention, hereby acknowledge the sovereign right of the Scottish people to determine the form of government best suited to their needs”

The origins of the Scottish Parliament can be drawn back to a turning-point moment thirty years ago as 160 representatives from Scotland’s politics, Churches, academia, trade unions and other civic leaders came together to sign the Claim of Right. Ten years later politicians sat in a Scottish Parliament for the first time in nearly 300 years.

It was signed by almost all the Labour and Liberal Democrat MPs of the time. They included future political leaders Gordon Brown, Alistair Darling, and Charles Kennedy. The SNP refused to continue as part of the Convention when it did not consider the case for independence, but have since hailed and supported the principle of people’s sovereignty declared by it.

The claim now lies in the Donald Dewar room at Holyrood.

In the Scottish Parliament on May 13th this year 11 newly elected MSPs protested the oath or affirmation they were forced to make. By law, they had no choice but to state “I will be faithful and bear true allegiance to Her Majesty Queen Elizabeth, Her Heirs and Successors, according to Law.” Should they have refused they would have been removed from Parliamentary duties and, two weeks later, removed from office.

Among them were six Green MSPs, three from Labour, and two of the SNP.

One of them was Nicola Sturgeon, who stated “I wish to say that the SNP pledges loyalty to the people of Scotland, in line with the Scottish constitutional tradition of sovereignty of the people.”

So what is this tradition, where does it come from, and what should it mean for our parliament going into the future?

To find one of its origins, we have to go back to one of the foundational events of the Scottish nation – to 1320 and the Declaration of Arbroath. The declaration made clear what the expectations were of the Scottish King, Robert the Bruce –  “King, not only by right of succession according to our laws and customs, but also with the due consent of us all”.

That consent came only a hundred years after the English Magna Carta that dented the absolute power of Monarchs over their Barons, the Church, and the law. Importantly, the Scottish declaration included the concept of a check and notice that the King could be legitimately overthrown should he betray the trust of his people, that the Barons would “we would instantly strive to expel him as our enemy and the betrayer of his own rights and ours, and we would choose another king to rule over us who would be equal to the task of our defence.”

Although it wasn’t a statement of true popular sovereignty, as the signatories would have had little real concept of such popular rule at the time, it did set a precedent. That precedent was that power was given not by birthright or divine provenance, but by contract. They ruled with consent, and should they breach that consent they would be deposed. This concept of rule by consent may have gone on to shape the American declaration of independence and the other revolutions against the absolute Royalties claiming divine right of the 18th and 19th centuries.

In 1689 this would be tested when the then Scottish Parliament passed the Claim of Right Act and declared James VII deposed because he had “invaded the fundamental constitution of the Kingdom and altered it from a legally limited monarchy to an arbitrary despotic power”. The Act drew from the thinking of George Buchanan (Scottish Gaelic – Seòras Bochanan), historian, humanist, and tutor to Mary, Queen of Scots. He laid down the doctrine that the source of all political power is the people and that the monarch is bound by those conditions under which he was entrusted with supreme power, and that it is lawful to resist, even to punish, tyrants. This was not initially well-received, condemned by parliament in 1584 and 1664, and in 1683 the University of Oxford ordered his work burned by a hangman.

The Claim of Right Act is an assertion that ultimate power rests with the ‘Nation’, of which Parliament is but the representative. It also condemned the act of attempting to manipulate the decisions of Judges, and their removal, change of pay, or appointment according to only the wishes of the King as “contrary to law”. It made explicit the need for the law to not only be independent of executive power, but superior to it. No ruler, of any station, should be above the law or able to bend it to their will.

The Claim of Right is founded on the rejection of the absolute authority of the Crown, or the Crown in Parliament, to impose policy or governance on Scotland against the will of the people. It grants sovereignty to those people. Its reinforcement in modern politics challenges all those who claim to value democracy to stand against it. Are their claimed values real, or do they abandon them when given the chance to impose their will on the people against their democratic Claim of Right?

The SNP has increasingly turned to this principle as a weapon against the archaic trappings of Westminster, which has long valued the sovereignty of Parliament, bestowed upon it by the Crown, rather than that of the people. This clash of constitutional values between England and Scotland may never have come to pass without the arrival of the Scottish independence movement, but now it has laid bare a fundamental gulf between the democratic principles of the Claim of Right, which people across Britain likely feel some affinity to, and the sovereignty of the Crown.

Recently the SNP Westminster group brought a motion to the Commons declaring “the sovereign right of the Scottish people to determine the form of government best suited to their needs.” A literal declaration of the principles of the Claim by Right.

SNP leader Nicola Sturgeon threw down the gauntlet, saying “The founding principle of that claim of right is one that all parties which have taken their place in this parliament should be able to subscribe to… There has never been a more important moment to recommit ourselves to the guiding principle of the claim of right that the people, the Scottish people, are sovereign.”

The recent history of the Claim of Right shows there is strong cross-party support, even to a degree it can be considered the status quo of Scottish constitutional politics, that it is the right of people of Scotland to choose the governance that best represents them and represent that which they no longer consider just. The Scottish Labour and Liberal Democrats backed this principle in the 80s. The Scottish Greens, SNP, and some Labour MSPs have re-asserted its relevance to our current parliament in their protests to the oath they were forced to make to the Windsor Monarchy.

Although we can look to history, learn from it, draw inspiration from it, and build upon it, we should never be limited to and by our past. The Claim of Right, and the sovereignty of the people, are the foundations we can build on as we imagine and fight for a Scotland fit for our future. That can begin with an oath for our Parliamentarians that reflects the heritage of our democracy and the modern one that elected them but must be so much more than that.

The sovereignty of the people should be the principle our modern nation rests upon, not limited by the anachronistic oaths and rituals that Westminster politics too readily turns to, hiding the Crown’s undemocratic sovereignty behind institutional procedures too obscure and opaque for citizens to follow. That means a universal recognition that only the people of Scotland can decide whether devolution suits their needs, or whether independence does. It is broader than that still. It applies to the whole constitutional settlement of rule we currently inhabit, including the independence of our courts, the structure of our Parliaments, and the powers and station of our Monarchy.

The Claim of Right leaves the power in the hands of the people of Scotland to reject the Monarchy and replace it with whatever institution they decide upon. The rule of the Monarch, and our Parliaments, can only happen by their consent, regardless of the claimed sovereignty of the Crown in our Parliamentary oaths. There is no principle of government and our constitution older, nor more fundamental to Scottish politics, than that.