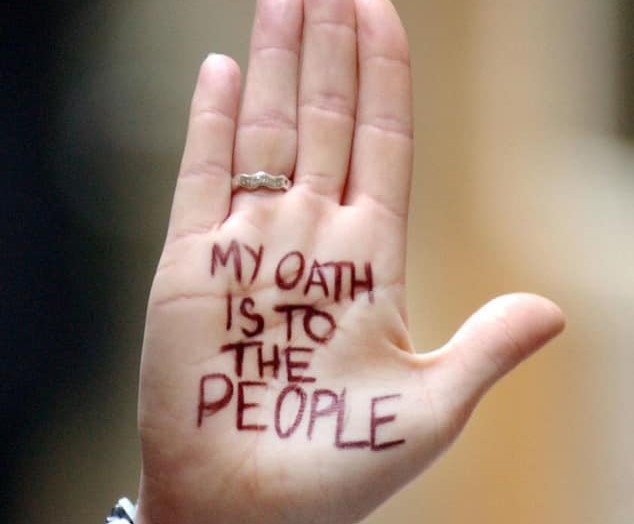 Today we are launching our campaign and petition to change the oath of allegiance sworn by our representatives in the Scottish Parliament.

You can find our petition here: https://www.change.org/p/scottish-parliament-an-oath-to-the-people-of-scotland-c49c7cc4-393f-420f-bcfd-e832ad25eac4

As they were sworn in as MSPs our representatives were required to swear an oath or affirmation containing the following: “I […] bear true allegiance to Her Majesty Queen Elizabeth, Her Heirs and Successors.” That is the only requirement.

There is no need to declare their status as public servants, their duty to support and represent their constituents, that they will do their best to deliver the policies they were elected on, not even their duty to the country. Only this. Allegiance to the Monarchy.

Any Member who refuses to declare their loyalty to the Monarchy will be unable to serve their elected role and will be stripped of pay and allowances until they have done. If they continue to refuse the oath they shall be removed as an MSP.

This is not a fit declaration for elected representatives in a 21st-century state. It is unfit to represent the democracy that elected our MSPs. Scotland can, and should, expect better.

MSPs should not have to take an oath under protest to serve as our representatives.

This cannot be repeated. For too long our Parliament has forced MSPs to undermine the legitimacy of their democratic mandate by putting the Monarchy before their constituents.

They are elected as public servants, not as subjects of the crown.

Our Republic’s proposed revision to the oath: “I (Member’s Name), do solemnly, sincerely and truly declare and affirm that I will be faithful and bear true allegiance to the sovereign people of Scotland and to our democracy, according to Law.”

You can support our call for change by signing this petition and signing up as a member of Our Republic: https://www.patreon.com/ourrepublic